Released through Buddha Belly Records, Remember the Alamo is a fun collection of inspiring country-alternative tunes created by a bunch of veteran musicians.  If you like the Allman Brothers Band, Pure Prairie League and New Riders, you’ll like Free Willy.

In all, Remember The Alamo is a fun bluegrass album and is recommended to anyone who loves bluegrass and country rock. While most of the songs have fiddle, the melodic “Not Your Everyday Lovesong” is truly reminicent of Vassar Clemens and his work with The Grateful Dead. 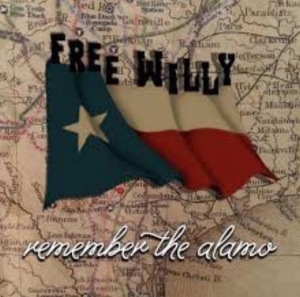 Jim Taylor recorded, mastered, and produced the album at his studio, The Mixing Room, in Nacogdoches, Texas.

The band came together in the Fall of 2016, at The Mixing Room, a recording studio in Nacogdoches, Texas.

“Last fall, I walked into Camp Street Cafe in Crockett, Texas, guitar in tow, to participate in

the quarterly acoustic jam session/open mic night,” Jones said.  “As I stood in the back, I was moved by the effect of twenty-five or so acoustic instruments playing their various parts in unison. I determined to dig through my files, recover the songs I had written through these past 40 years or so, pick out my favorites, and attempt to recreate that sound to share with the world.”

Jones has succeeded. There are some true gems on this record, including “Amazing Gracie,” “God Has a Name” and the amusing “It’s Good if you Like It.”